Investment and finance newsletterWhat return can you expect in this market?

What return can you expect in this market?

Double-digit gains are a thing of the past for diversified growth portfolios, but there are still ways to prosper.

Way back in the early 1980s, it was obvious the medium-term (five-year) return potential from investing was solid.

The Reserve Bank’s cash rate was averaging around 14 per cent, three-year bank term deposits about 12 per cent, 10-year bond yields about 13.5 per cent, property yields (commercial and residential) about 8 to 9 per cent, and dividend yields on shares were around 6.5 per cent in Australia and 5 per cent globally.

Such yields meant that investments were already providing very high cash income and for growth assets such as property or shares, only modest capital growth was necessary to generate good returns.

Well, at least the return potential was obviously attractive in nominal terms, as back then inflation was running around 9 per cent and the big fear was it would break higher.

As it turned out, most assets had spectacular returns in the 1980s and 1990s. This can be seen in superannuation funds, which averaged 14.1 per cent in nominal terms and 9.4 per cent in real terms between 1982 and 1999, after taxes and fees. 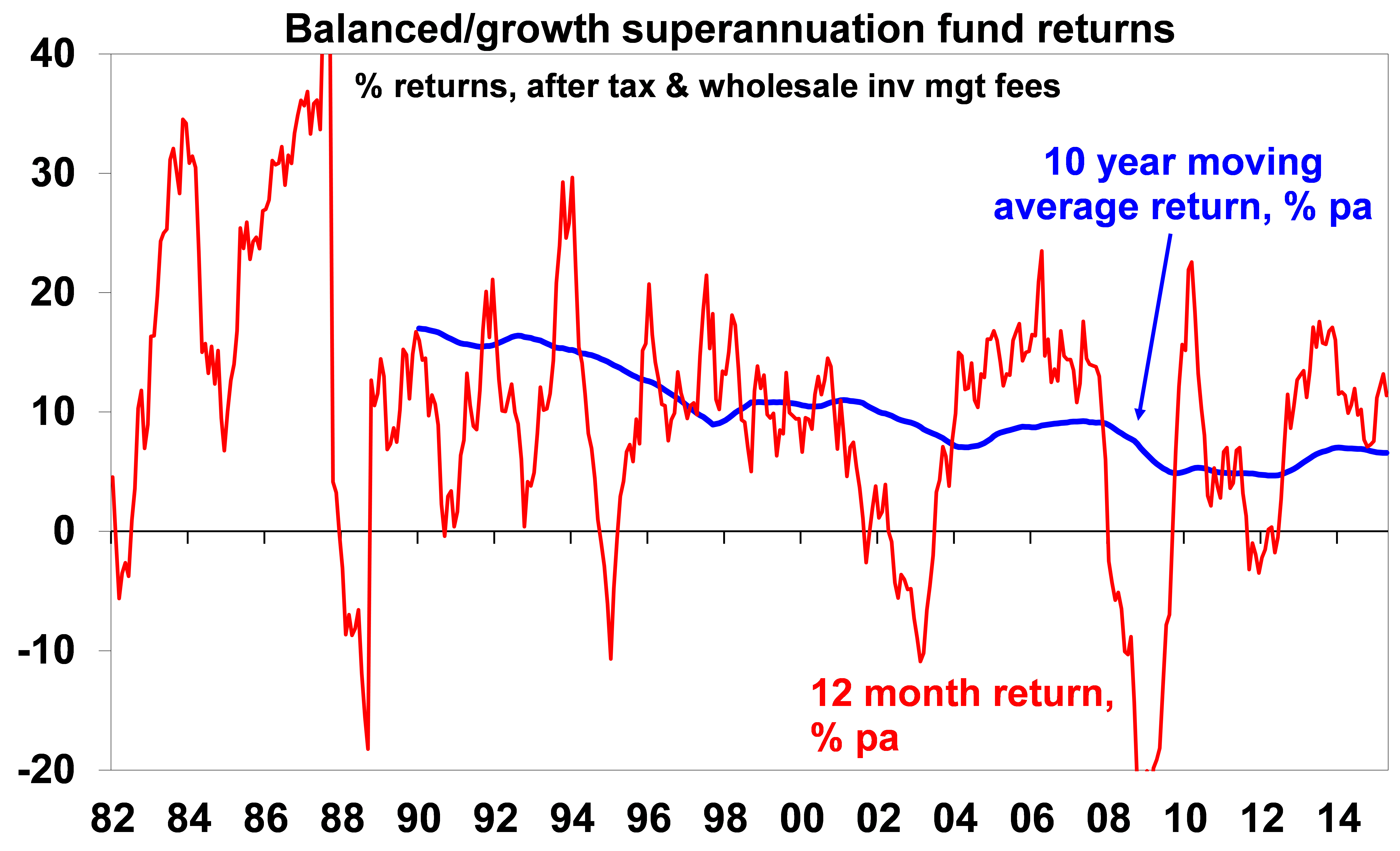 Yields have fallen across the board. The RBA cash rate is just 2 per cent, three-year bank term deposits 2.7 per cent, 10-year bond yields 2.9 per cent, gross residential property yields about 3 per cent, and while dividend yields are still around 6 per cent for Australian shares (with franking credits) they are around 2.5 per cent for global shares.

Although the recovery from the GFC and the eurozone debt crisis and the fall in yields (which goes hand-in-hand with capital growth for bonds and growth assets) has seen solid double-digit returns from a diversified mix of assets over the past few years, it would be dangerous to assume we have now returned to a world where double-digit annual returns are the sustainable norm.

Don't look back – what drives potential returns?
Our approach to get a handle on medium-term return potential is to start with current yields for each asset and apply simple and consistent assumptions regarding capital growth. 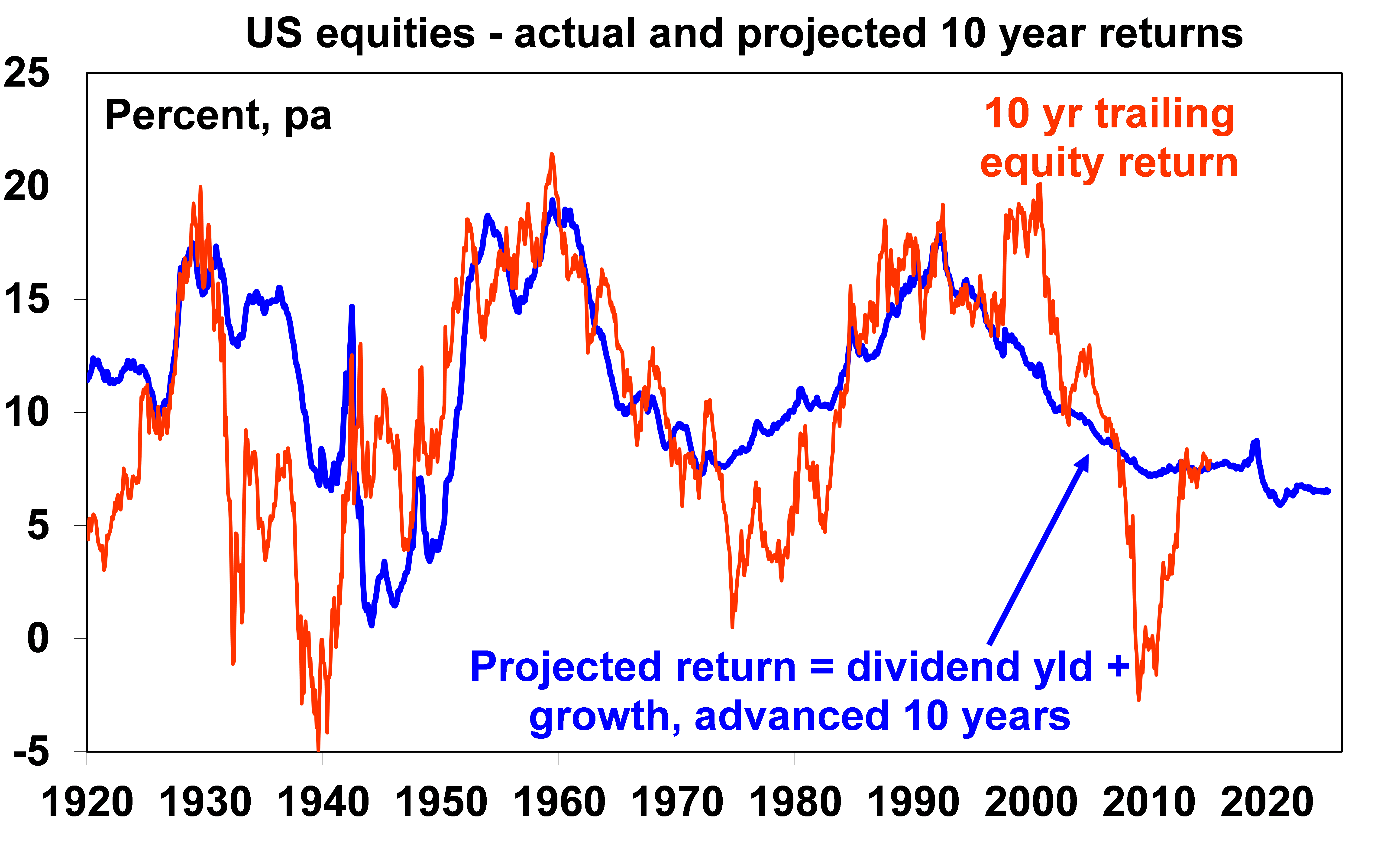 Projections for medium-term returns
This approach results in the return projections shown in the next table. The second column shows each asset’s current income yield, the third their five-year growth potential, and the final column their total return potential. Note that:

The return implied for a diversified growth mix of assets has now fallen to 7.3 per cent per annum and is shown in the final row.

Most of these will possibly have the effect of constraining nominal economic growth and hence total returns. But not necessarily. Increasing automation is positive for profits and the downtrend in commodity prices is positive for commodity users such as the US, Europe, Japan and Asia, but not so good for Australia (where we have lowered our real economic growth assumptions). 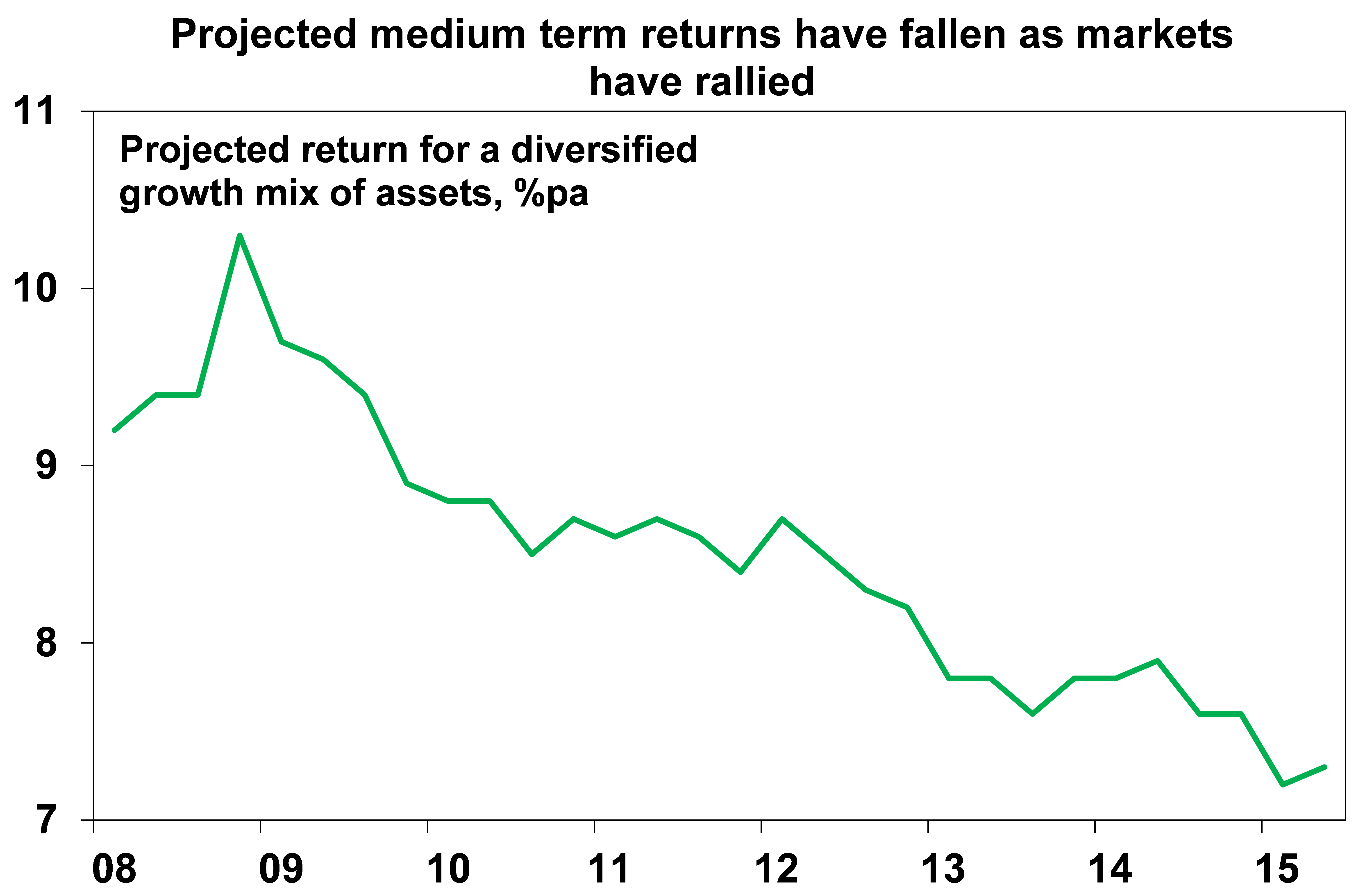 There are several implications for investors:

Shane Oliver is Head of Investment Strategy and Chief Economist at AMP.

ETFs and ETPs pages on the ASX website has useful information on the features, benefits and risks of these products.

This article appeared in the June 2015 ASX Investor Update email newsletter. To subscribe to this newsletter please register with the MyASX section or visit the About MyASX page for past editions and more details.

This article appeared in the June 2015 ASX Investor Update email newsletter. To subscribe to this newsletter please register with MyASX.