2016 hybrid returns close to All Ords, with less volatility than shares.

The ASX-listed subordinated debt and hybrid market has returned around 6.6 per cent this calendar year to date. This compares to the All Ordinaries Accumulation Index return of 6.8 per cent and returns from cash of 1.6 per cent. Given that hybrids are less risky than shares and more risky than cash, the performance has been excellent.

The listed subordinated debt and hybrid market is capitalised at around $48 billion and comprises issues by banks, insurers and non-banks. The securities fill a space between equity and debt and have some of the characteristics of both, which is why they are called hybrids.

The equity characteristics are that they rank below debt issued by the company and in the case of troubles with the issuer they can display a heightened relationship to the underlying share price. Their debt-like nature comes from the high credit quality of the issuer, which means that generally company-specific problems do not really affect security prices all that much over the long term.

Within the market, some securities performed well while others less so over the year to date. As an example, the CBA PERLS VIII (ASX code: CBAPE) returned 9.1 per cent, comprising a price increase of $5.60, coupons of $2.40 and a franking credit of $1.10.

On the other hand, the APA Group Subordinated Notes (ASX code: AQHHA) returned only 3 per cent, comprising a price fall of $1.96 and coupons of $5.02.

(Editor's note: Hybrid security is a generic term used to describe a security that combines elements of debt securities and equity securities. They typically offer to pay a rate of return, fixed or floating, until a certain date, in the same way debt securities do. Each hybrid is unique and can have a variety of complex product features. To learn about the features, benefits and risks of ASX quoted hybrids, take the free ASX Bonds and hybrids online course.)

The reasons for the good performance of the hybrid market over the year to date can be traced back to two major issues:

Last year investors became concerned about banks and bank share prices were volatile, falling materially during the year. Hybrid prices were not unaffected and fell as well, with the market as a whole suffering about a 5 per cent capital loss over the 12 months to January 2016. As with equities, a fall in prices boosted the yields and these, comprising the cash rate plus a spread margin, reached levels last seen in the middle of the GFC.

There has been an enormous amount of primary or initial public offering (IPO) supply over the past five years as banks have had to raise additional capital to comply with the new Basel III regulations. The chart below shows the large amount of issuance over the past four years. As investor appetite waned, banks were forced to offer higher margins over cash to attract investors. What became apparent during the last six months is that there is likely to be little net new bank hybrid issuance over the next 12 to 18 months. 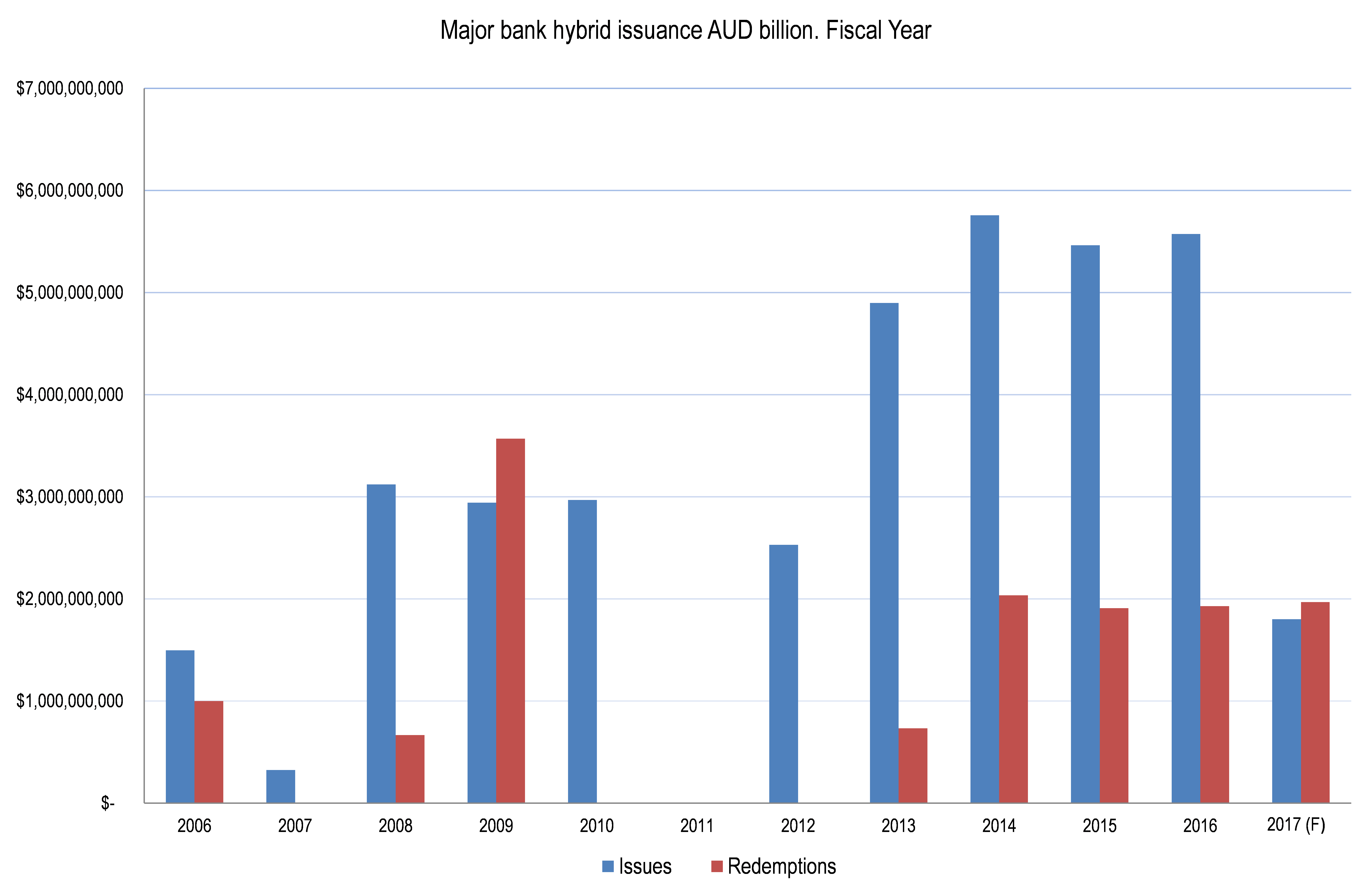 So there was a situation at the beginning of the year where the market was historically cheap and supply was drying up, a combination of which prompted strong demand.

Two additional factors added further impetus to price rises. The first was the emergence of institutional buying that had been largely dormant since the GFC. Second, ANZ was able to issue a hybrid to offshore investors in the middle of the year, which meant it was less reliant on the domestic market.

Large super funds, which had avoided hybrids since the GFC, were attracted by a yield of around 7 per cent on bank hybrids. A 7 per cent return outcome is close to the 20-year annual return derived from equity markets, and bank hybrids sit above equity in the capital structure and are less risky.

Spread margins in the secondary market continued to narrow (margins move in the opposite direction to price) during the year and contracted another 0.30 per cent, adding to the capital gains.

Many of the factors that resulted in the good returns over the year to date remain in place and increase the prospect of capital gains in hybrids in the 12 to 18 months ahead, in our opinion:

The income yield on a diversified portfolio of subordinated debt and hybrid securities is currently around 5.5 per cent, or 4 per cent over cash rates. The volatility (a risk proxy) of a diversified hybrid portfolio has always been much lower than equities, so even if there are little or no capital gains, there is a place for hybrids in most investment portfolios.

Notwithstanding the positive outlook, hybrids do carry more risks than cash and simple debt or term deposits investments. They are vulnerable to a dramatic weakening of banks or bank share prices and there are numerous regulatory requirements that make them structurally complex.

These risks can be mitigated to some extent by owning a range of subordinated debt and hybrid securities issued by banks, insurers and non-bank issuers, and avoiding some of the riskier securities.

Given the complexities and the random behaviour of securities, we think an investment in hybrids is best served by outsourcing the management or security selection process to a specialist hybrid manager or investment professional who understands the security structures, can construct a diversified portfolio of securities and can capitalise on the market’s inefficiencies that occur from time to time.

Norman Derham is a founding director of Elstree Investment Management, a specialist hybrid fund manager. Elstree has been managing portfolios of hybrid securities since 2003 and the executive directors have more than 90 years’ combined experience in debt capital markets.

The free ASX guide, Understanding Hybrid Securities, has more detailed information on the features, benefits and risks of hybrids, and how they compare to other types of securities.

This article appeared in the November 2016 ASX Investor Update email newsletter. To subscribe to this newsletter please register with the MyASX section or visit the About MyASX page for past editions and more details.

This article appeared in the November 2016 ASX Investor Update email newsletter. To subscribe to this newsletter please register with MyASX.