Highest number of ASX IPOs in a decade.

In 2017, by number, ASX had its most active year for initial public offerings (IPOs) in 10 years. There were 143 new listings, the most since the global financial crisis and end of the last mining boom, and more than peer exchanges NYSE, Nasdaq, LSE, TMX and SGX.

The year was characterised by a proliferation of small and mid-cap listings, particularly in the technology and mining sectors, and continued growth in listed investment companies and trusts (LICs and LITs).

Overall, while the number of listings increased, IPO capital raised was down, from $8.5 billion in 2016 to $6.4 billion in 2017, as several larger companies either postponed IPOs or chose trade sales instead of the public market.

Unusually, LICs and LITs occupied four of the top six IPO spots by capital raised, including Magellan Global Trust, the largest of the year, which raised $1.5 billion.

At the end of 2017, there were 278 foreign listings on ASX out of 2,275 listings in total, which is an all-time high and embeds a longer-term trend. 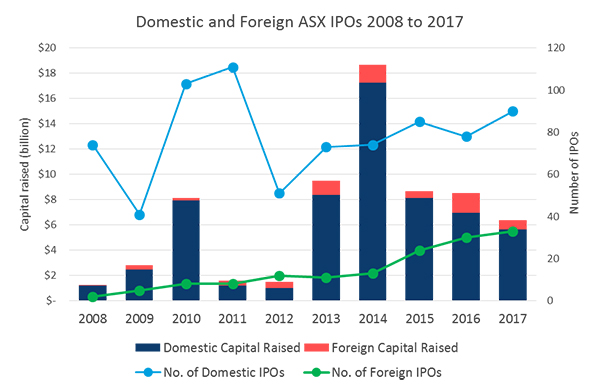 Australia has one of the world’s largest pools of investable funds, with $2.3 trillion in assets under management, and most funds allocated to equities are mandated to invest in ASX-listed companies – a key selling point for foreign listings of any size.

Moreover, the capital raising, liquidity and valuation advantages of ASX are particularly strong in the small and mid-cap range ($50 million to $1 billion market capitalisation) when measured against other major markets, where such companies are often limited to junior boards and/or face difficulty attracting investor interest.

ASX is unique in that it combines a single globally recognised main board, a robust regulatory environment, early entry into key indices relative to other major markets, strong peer groups in most industry sectors, and an investor ecosystem supportive of small and mid-cap companies.

Around three-quarters of foreign ASX-listed companies are listed on ASX exclusively; that is, they are not listed on another market. The rest are dual listed, typically with a listing in the company’s home market, or sometimes with multiple listings.

Companies listed on more than one market tend to be mid and large caps that have the critical mass to absorb additional listing costs and sustain split liquidity in trading volumes.

The liquidity point is important as it has index implications; if a foreign company is listed on ASX and its home market, only ASX trading volumes and market capitalisation are taken into consideration for S&P/ASX index eligibility purposes.

For example, until February 2018 Xero, the New Zealand-based accounting software company, was listed on ASX and NZX. At the time of the S&P/ASX indices rebalance in September 2017, around 30 per cent of Xero’s trading took place on ASX and 12 per cent of shares were held on the share register in Australia, so only those shares were considered for market capitalisation criteria.

As a $3.3-billion company at the time, Xero would ordinarily be large enough for the S&P/ASX 200 index, but because of the dual listing it only met requirements for the S&P/ASX 300.

Having delisted from NZX and consolidated 100 per cent of its trading on ASX, Xero is expected to enter the S&P/ASX 200, Australia’s key market benchmark and a globally investable index.

The S&P/ASX 300 Info Tech index was up 23 per cent (versus the broader market up 7 per cent); market leader WiseTech Global passed the $4 billion market cap mark and entered the S&P/ASX 200; fintech company Afterpay Touch Group was formed through a $400 million merger; and Oracle announced its intention to acquire construction software firm Aconex for $1.6 billion.

Building on a trend of the past few years, there were several IPOs in the software as a service (SaaS), fintech and online marketplace subsectors, such as talent management software company ELMO and US-based consumer finance marketplace Credible Labs.

At the end of 2017 there were 224 tech companies listed on ASX (and a further 24 in telecoms), making it ASX’s second largest sector by number, behind the mining sector.

There are, of course, innovative companies in industries outside the tech sector, reflected in many of the IPOs in 2017, such as German tyre recycling business Pyrolyx and renewable energy play New Energy Solar.

This is also true of the healthcare sector, which had another strong year with 13 IPOs, taking the total to 172, including oncology company Telix Pharmaceuticals, which is developing radiopharmaceutical products, and Israel-based e-health company G Medical Innovations.

At the more speculative end of the market, an emerging medical cannabis industry has given rise to a dozen ASX listings in the area, including Cann Group, the top-performing IPO of 2017 at the time of writing.

Higher spot commodity prices, driven largely by demand from China, led to a resurgence of the resources sector in 2017. There were more than 30 IPOs, the most in over five years, including several lithium and cobalt explorers that sought to capitalise on higher prices in tech-metals, boosted by demand from battery and electrical component manufacturing.

Positive outlook
The outlook for IPOs is generally positive, with several larger companies in the pipeline, strong business conditions and a favourable global macroeconomic environment.

There are inherent risks in any equity market and some companies may choose trade sales or private equity instead of IPOs, especially as low interest rates persist.

However, as the past five years have demonstrated, there continues to be institutional investor demand for new product and strong momentum in small and mid-cap listings. Given these market dynamics, ASX is well positioned to attract higher levels of capital raising and more cross-border, technology and resources IPOs in 2018.

More information on upcoming ASX floats and listings is available.

This article appeared in the February 2018 ASX Investor Update email newsletter. To subscribe to this newsletter please register with the MyASX section or visit the About MyASX page for past editions and more details.

This article appeared in the February 2018 ASX Investor Update email newsletter. To subscribe to this newsletter please register with MyASX.