When we look at potential share investments, one of the questions we ask is “what could happen over the short to medium term in this stock/sector that will surprise people?” That is, what is currently not priced in by the market?

Pockets of over-valuation and under-valuation always exist in asset markets. These mispriced areas can be contained across geographies, asset classes, sectors, property markets, etc. We believe the Western Australian economy is currently one such under-appreciated sector.

Economic growth has returned to Western Australia after a period of significant absence. The last two quarters of state final demand (our preferred measurement of the health of the state economy) have demonstrated positive year-on-year growth.

The fact that the Western Australia economy may be past its worst is becoming more widely accepted but we feel the potential for the economy is not fully appreciated or priced into relevant asset exposures.

When we talk about the potential for economic growth in WA we focus on two aspects:

I will use the two very topical issues of population growth and housing affordability to address these aspects.

Surprisingly strong migration growth, into Sydney and Melbourne in particular, has been a key driver of the east coast economy in the past few years.

The graph below demonstrates several characteristics of the migration cycle of the main states in Australia: New South Wales and Victoria are declining off extraordinary cycle highs; WA net migration has turned, having briefly been negative for the first time in more than 35 years; and it is a cyclical series.

Interestingly the other series that looks very similar is apartment building approvals. 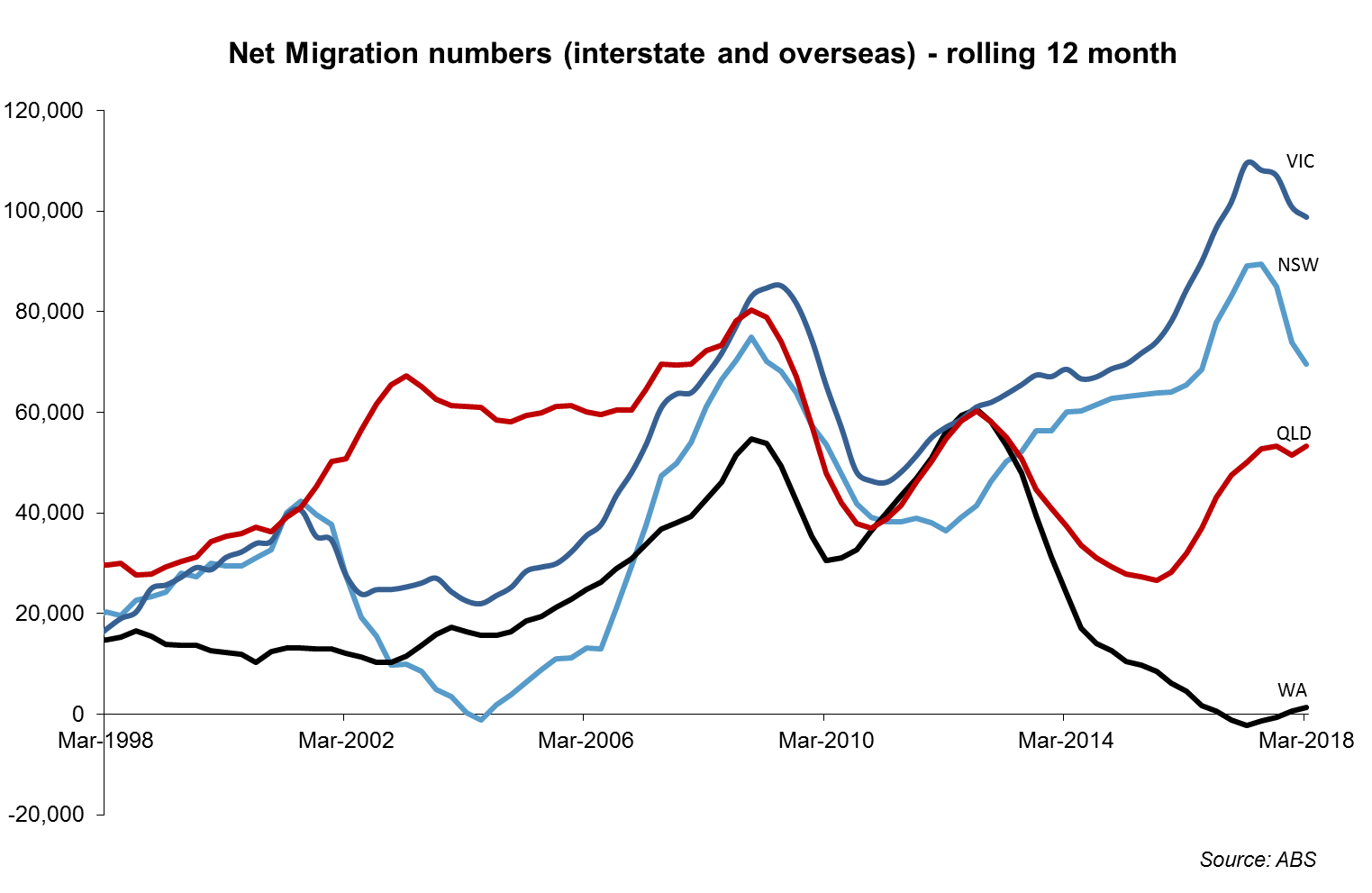 This low population growth has had a profound impact on the economy. For example, annual growth in retail sales is currently negative compared to a national average of +3.4 per cent per annum; and housing approvals are running at levels not seen since early 2000s when more than 25 per cent fewer people lived in the state.

Haves and have nots of housing affordability

Housing is always a hot topic in Australia and we believe the dislocation between the East and West Coast economies in Australia has presented an interesting juncture for the WA housing market.

In early 2010 housing affordability in Perth, Sydney and Melbourne was at similar levels. Subsequent movements in wages and house prices, in part due to population changes, give a very different picture today.

Wage growth in NSW and WA has been roughly equal to the post-GFC recovery period, with anaemic annual growth contributing to total growth in wages over eight years of roughly 24 per cent in both states.

House price appreciation has been very different. Having peaked in 2013, Western Australian house prices are now below their 2010 levels, whereas Sydney prices have increased by more than 75 per cent over the past eight years; that is, more than three times wage growth.

There are two important aspects to this divergence in housing affordability. The first speaks to the capacity of consumers in Western Australia to spend more money once increased confidence in the future is cemented.

To this end, it is worth noting the improvement in the employment market over the past 18 months and forward indicators, such as job vacancy advertisements, which point to further improvement in the job market. Consequently, Western Australian consumer confidence has been steadily climbing and now sits at a five-year high. 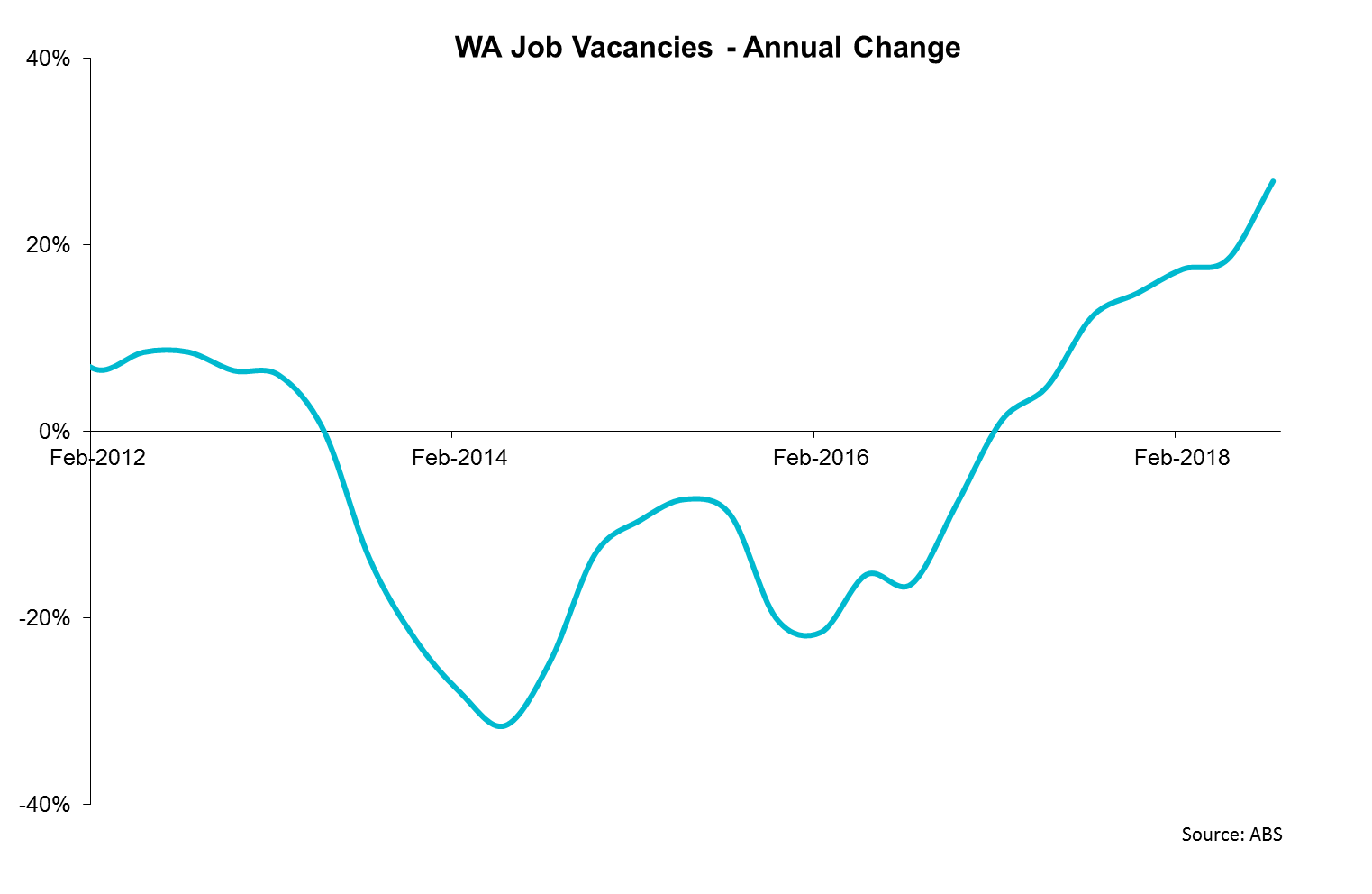 The secondary impact of this housing market divergence is that national interest rates will be set with the capacity of the east coast mortgage holder in mind.

Twice I have seen property markets boom for years on the back of interest rates set for a larger and slower economy, while a subset – Ireland in the late 1990s/early 2000s and WA from 2004 to 2008 – enjoyed economic growth that should have had considerably tighter monetary policy.

The result of this dislocation in economic growth and monetary policy is negative real rates, which is a catalyst for property price appreciation. The foundations have certainly been formed in Australia over the past five to 10 years for this to re-occur in Western Australia.

How can we play an improving Western Australian economy through ASX investments? A turn in the resources cycle is an obvious lead indicator for a turn in the economic fortunes of the state and there is no shortage of mining-related investments.

However, investments with a more broad-based exposure to the Western Australian economy are more difficult to obtain. Potential exposure includes property stocks with varying degrees of exposure to the state; a handful of relatively small industrial stocks; and a listed investment company or two.

Interestingly, many of these ASX-listed companies that offer exposure to Western Australia economic growth share the following characteristics: no need for capital due to strong balance sheets; relatively sticky and concentrated registers with heavy board and (or) management ownership; and successful dividend track records.

The positive news is that the early stage of the Western Australian turnaround cycle and current market volatility presents the opportunity to access this exposure at attractive valuations compared with mid-or late-cycle numbers.

This article appeared in the November 2018 ASX Investor Update email newsletter. To subscribe to this newsletter please register with the MyASX section or visit the About MyASX page for past editions and more details.

This article appeared in the November 2018 ASX Investor Update email newsletter. To subscribe to this newsletter please register with MyASX.