One of the most reliable reversal signals is a head and shoulders formation. As the name implies, it is created as a result of three congestion areas. The first forms a shoulder, the second the head and the third a second shoulder. The head congestion is above the shoulders, which both form on the same support line and within the same basic range.

In the case of a head and shoulders top, the reversal of a bull market trend is signalled. The projected target lower is the same distance below the neckline as from the neckline to the head. A break of the neckline not only signals a move to the target area, but also confirms the trend change and the start of a new bear market trend.

Rallies are generally associated with increasing volume during a bull market phase, therefore when volume decreases on a market advance it can signal a potential reversal. The head section of the head and shoulders is often accompanied by decreased volume, relative to past advances. The right shoulder, too, often has very light volume associated with it, but the break of the neckline and the subsequent move lower will generally see volume increase.

A break of the neckline will often see price retest the old neckline, which then becomes resistance, prior to the major move lower. As a result there is often a second opportunity to establish a position if you miss the initial neckline break.

In the example below, the second shoulder is still in the process of being formed, but one can already see the recognisable shape of the head and shoulders.

The head and shoulders bottom signals the end of a down trend and a reversal of that trend, not just a change from trend to trading bracket, but also the beginning of a new bull market trend. This is confirmed by a rally above the neckline. The projected target is the same distance above the neckline as the distance from the low to the neckline. 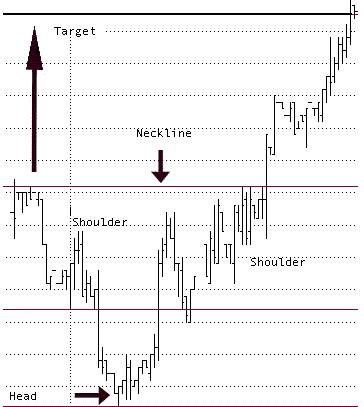 Disclaimer
© The MacLean Group Pty Ltd ACN 096 967 038. All rights reserved 2003. This article has been prepared by The MacLean Group and licensed to ASX. The views are those of the author and not of ASX. This material is educational and it is not intended to constitute financial advice.