The bear spread can be considered when the investor expects a moderate fall in the market but is not prepared to pay to take a put outright. The strategy consists of the purchase of a put option and the sale of a put option with a lower strike price. 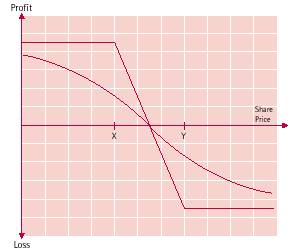 As with the bull spread, the written leg of this strategy serves to reduce the cost of entering the position. However it also caps the profits that can be earned. The maximum profit to be earned is the difference between the strike prices of the two options, less the cost of the spread. If, at expiry, the share price has fallen to the strike price of the sold option, the maximum profit will be earned. If the stock declines to these levels, the trader may well choose to unwind the spread early, in order to avoid the possibility of exercise on the short leg.

The maximum potential loss is the cost of the spread. This will occur if, at expiry, the share price is above the exercise price of the bought option.

If the stock price rises suddenly, the spread may be unwound before the taken put loses too much time value.

The bear spread can be constructed using calls instead of puts. As with the put spread, the trader buys the higher strike option and sells the lower strike option. The trader may decide to use calls instead of puts in order to take advantage of options that are viewed as overpriced. Since the trader is selling the spread, the receipt of higher premiums is a benefit. There may also be greater liquidity in calls than puts, giving greater flexibility when entering and exiting the spread.

The bear call spread can be seen as writing a call with protection against an unexpected rise in the market. In this instance, the trader may write a call around the money, and take a call out-of-the-money, which effectively provides a ceiling to the potential loss if the market should rise.

The disadvantages of the bear call spread are similar to those of the bull put spread. Since the spread is placed for a credit, there will be margining obligations. Secondly, there is an increased risk of exercise, since the short call has the lower strike price, and is usually written at-the-money.

After a period of rises in the market, you feel that a minor correction is about to take place. ABC shares have run up to $16.10, and you believe that they could pull back to around $15.00 over the next two to three months. You are not willing to pay for an outright put, so you decide to buy a bear put spread: 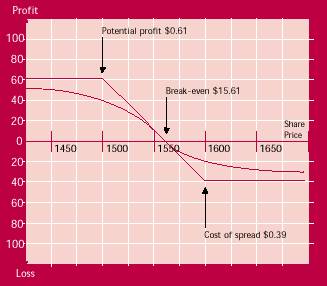 Disclaimer
The information contained in this webpage is for educational purposes only and does not constitute financial product advice. ASX does not represent or warrant that the information is complete or accurate. You should consider obtaining independent advice before making any financial decisions. To the extent permitted by law, no responsibility for any loss arising in any way (including by way of negligence) from anyone acting or refraining from acting as a result of this material is accepted by ASX.