Austraclear, a wholly owned ASX subsidiary, is Australia’s settlement system and central securities depository for the wholesale debt market. Its systems provide customers with secure and guaranteed delivery of cash or securities, and efficient electronic registration and record-keeping of transactions.

Since July 2014, Austraclear has supported RMB cash settlement by providing real-time straight-through-processing links to Hong Kong (via CHATS RTGS), mainland China (via CNAPS), and the rest of the world (via CIPS).

As of September 2016, Austraclear also provides full end-to-end support for the issuance, settlement and holding of RMB-denominated securities. 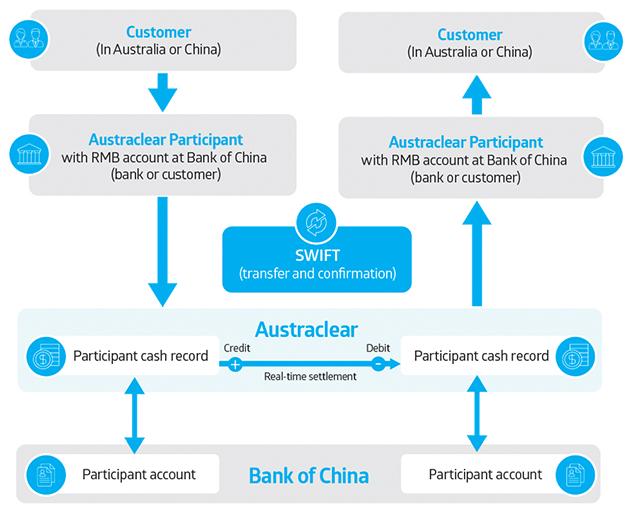 Austraclear is a real-time platform with straight-through processing links to global payment systems.

Austraclear AUD payments use smart protocols that are also used for RMB settlements. These protocols enable:

allowing real-time irrevocable settlement of RMB transactions in the same way as AUD.

The Bank of China in Sydney then provides fast secure straight-through processing from Austraclear direct to Hong Kong through CHATS RTGS, to China through CNAPS, and the rest of the world through CIPS.

Customers are able to instruct, settle and receive intraday value on their account on the same day rather than overnight (as typically provided through international systems).

RMB cash settlement to the end-customer within Austraclear: 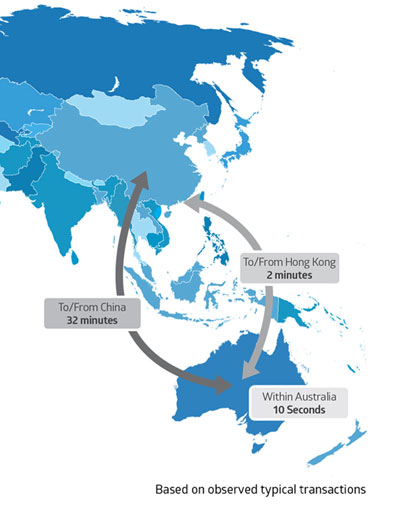 Companies can use the platform to conduct fast, efficient and secure cross border transactions in RMB when exporting or importing goods and services to/ from China, and when doing direct investments into/from China.

With Asia to its west and New Zealand and Oceania to its east, Sydney is located in the centre of the Asia Pacific region and therefore well placed to service the region during the APAC time-zone:

Austraclear also caters for the issuance and settlement of RMB securities: