How Federal elections impact the sharemarket

Mixed evidence, but possibility of a relief rally after election as uncertainty eases.

With a Federal election on July 2, it is natural to wonder about the implications for investment markets and the economy.

There is anecdotal evidence that uncertainty around elections causes households and businesses to put some spending decisions on hold, and the longer the campaign the likelier this is. Qantas has already suggested that election uncertainty may be affecting spending.

However, evidence regarding the affect of elections on economic indicators is mixed and there is no clear evidence that uncertainty effects economic growth in election years.

Since 1980, economic growth through election years has averaged 3.7 per cent, which is greater than average growth of 3.2 per cent over that time. That said, growth was below average at 2.3 per cent in 2013, when there was also a long de facto election campaign.

As for the sharemarket, there is some evidence of it tracking sideways in the run-up to elections, which may be because investors do not like the uncertainty associated with the prospect of a change in economic policies.

The first chart below shows Australian share prices from one year before to six months after federal elections since 1983. This is an average for all elections (but excludes the 1987 and 2007 elections, given the global shares crash in late 1987 and the start of the GFC in 2007), and  includes the periods around the 1983 and 2007 elections, which saw a change of government to Labor, and the 1996 and 2013 elections, when there was a change of government to the Coalition.

The chart below suggests some evidence of a period of flatlining in the run-up to elections, possibly reflecting investor uncertainty beforehand, followed by a relief rally soon afterwards. 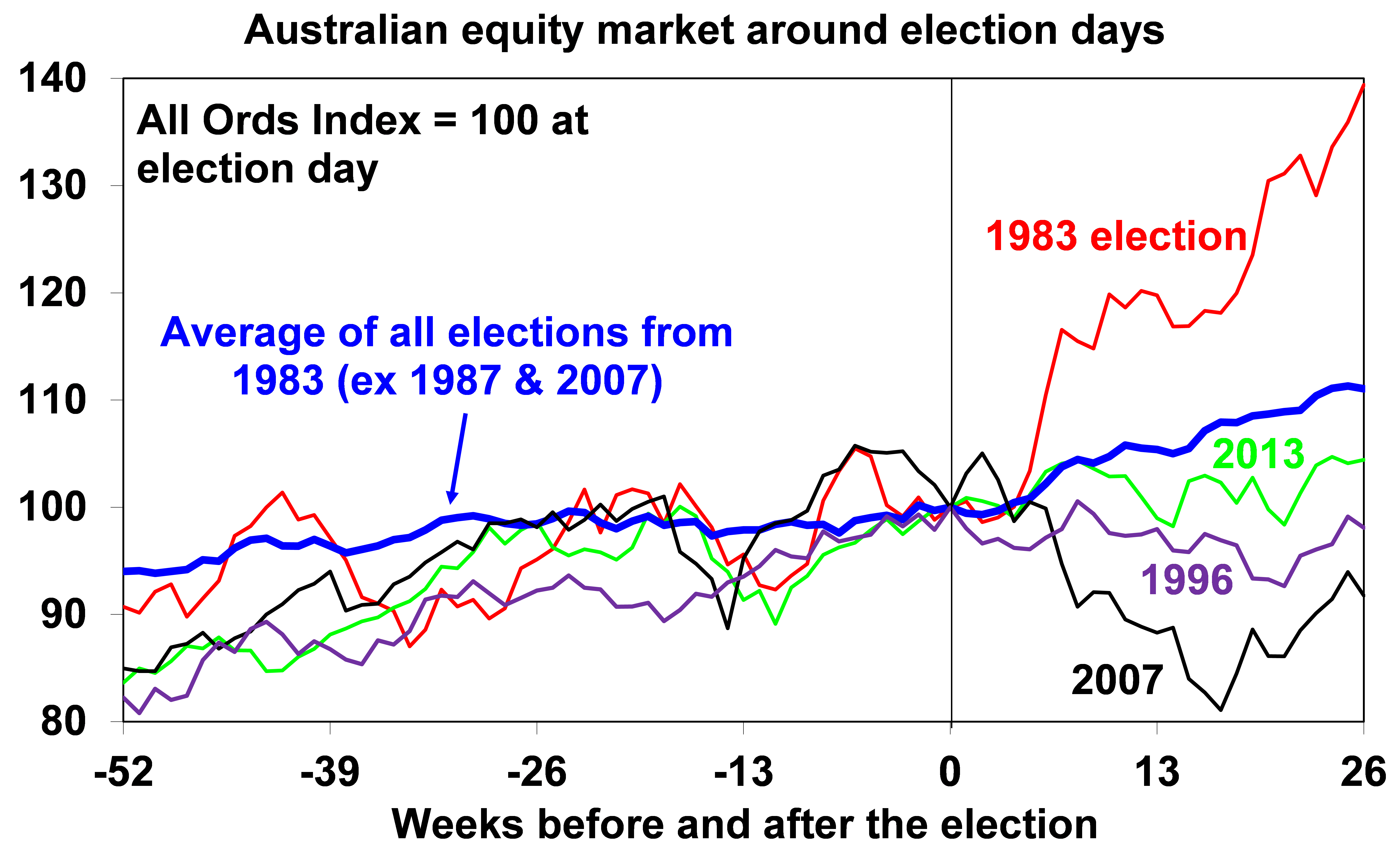 However, the elections resulting in a change of government have seen a mixed picture. Shares rose sharply after the 1983 Labor victory but fell sharply after the 2007 Labor win, with global developments playing a role in both.

After the 1996 and 2013 Coalition victories, shares were flat to down.

So based on historical experience, it is not obvious that a victory by any one party is best for shares in the short term, and the impact of swings in global shares arguably played a bigger role than the outcomes of federal elections.

The next table shows that after eight of 12 elections since 1983, shares were up three months later, with an average gain of 4.8 per cent.

Based on All Ords index. Source: Bloomberg, AMP Capital

The next chart shows the same analysis for the Australian dollar.

In the six months before elections there is some evidence the Australian dollar experiences a period of softness and choppiness, which is consistent with policy uncertainty, but the magnitude of change is small. On average, the currency has drifted sideways to down slightly after elections. 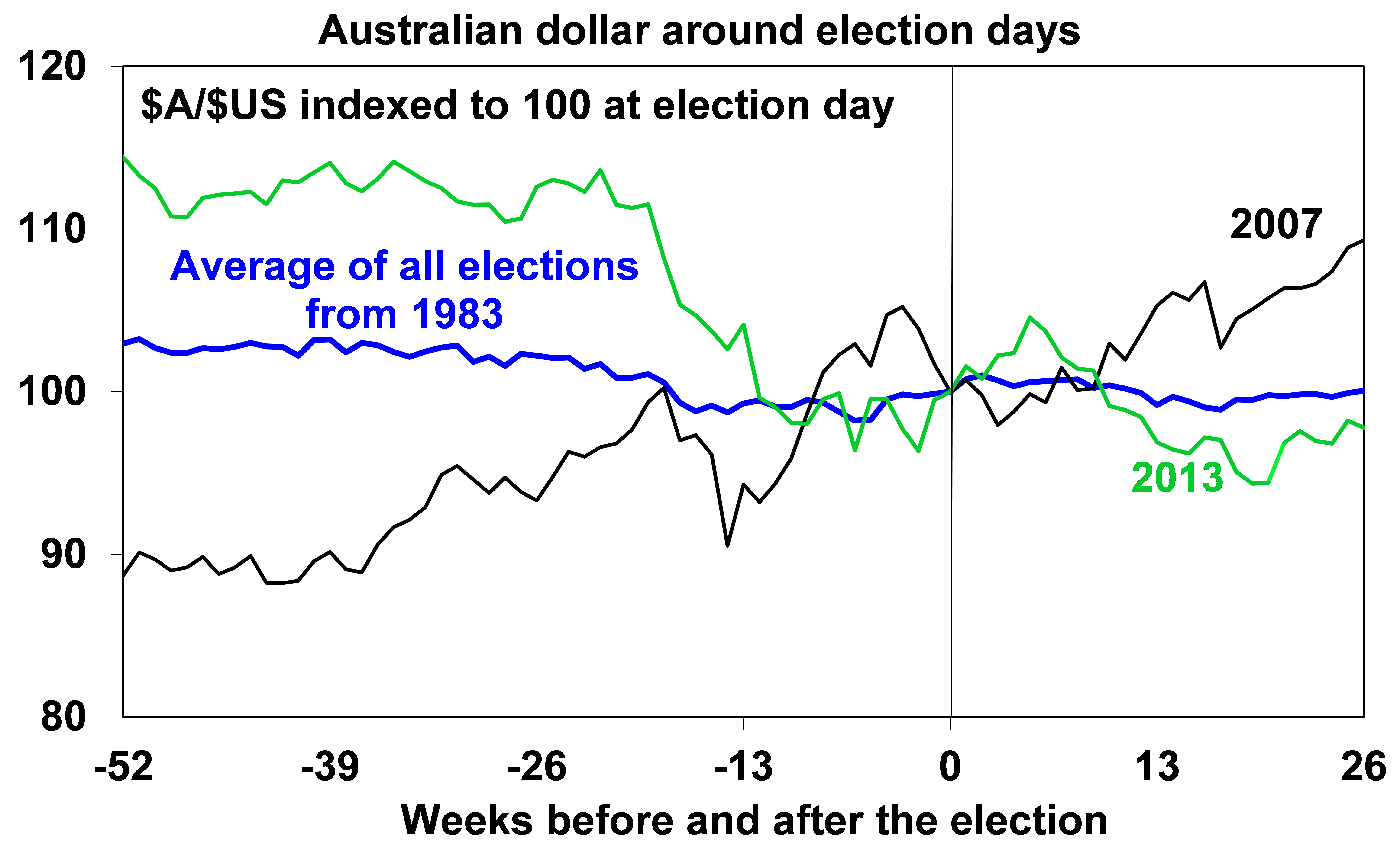 Australian bond yields have tended to fall over the six months before elections since 1983, which is contrary to what one might expect if there was investor uncertainty.

However, this may be related to the aftermath of recessions, slowdowns and/or falling inflation before the 1983, 1984, 1987, 1990 and 1993 elections, and the secular decline in bond yields since the 1980s. Overall, it is hard to discern any reliable effect on bond yields from federal elections themselves. 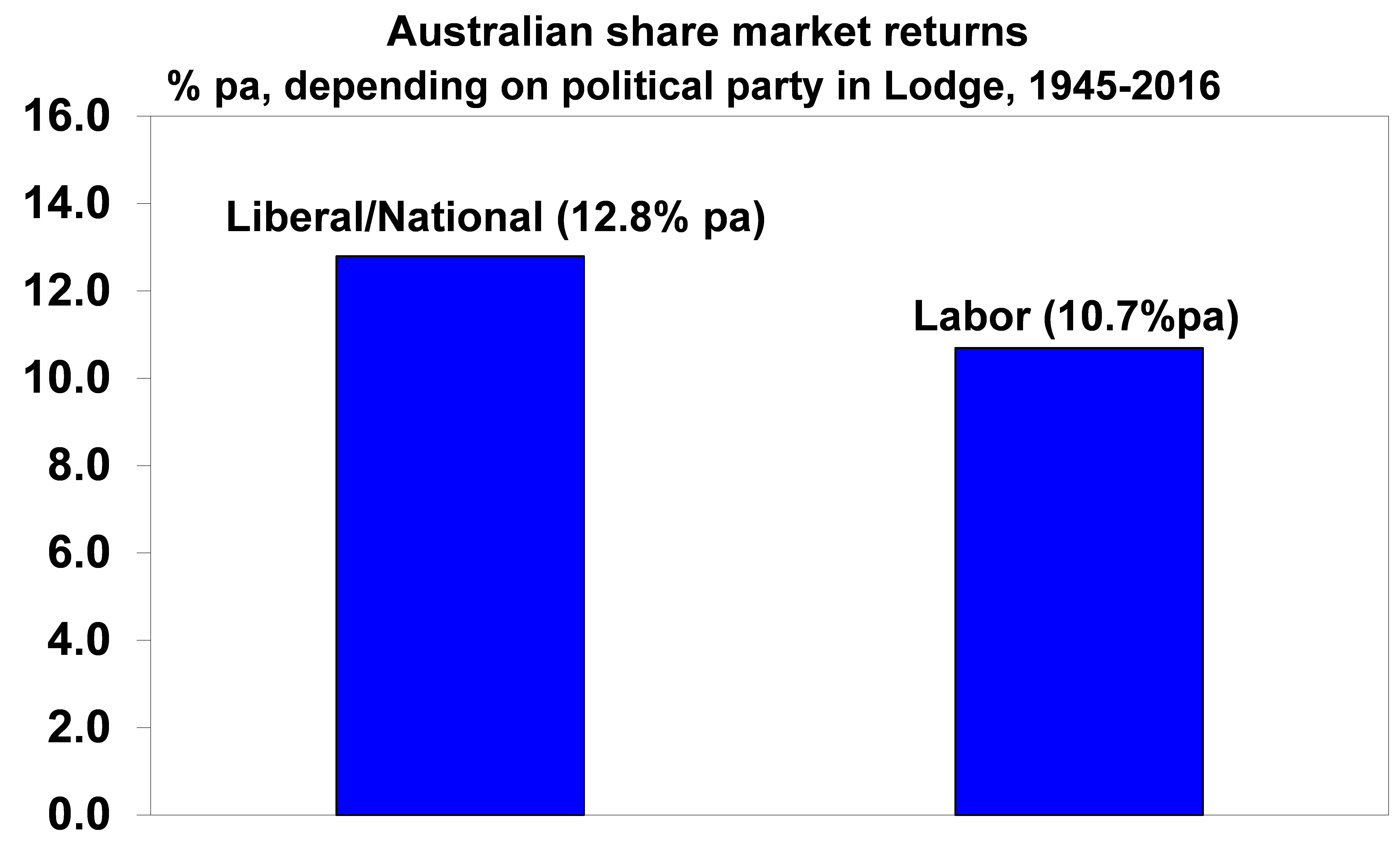 It may be argued that the Labor governments led by Gough Whitlam in the 1970s and Kevin Rudd and Julia Gillard more recently had the misfortune of severe global bear markets and, if these periods are excluded, the Labor average rises to 15.8 per cent per annum. Then again, that may be pushing things a bit too far.

Once in government, political parties are usually forced to adopt sensible macro-economic policies if they want to ensure rising living standards, and arguably there has been broad consensus on both sides of politics regarding key macro-economic fundamentals – for example, low inflation and free markets.

However, this time the policy differences between the Coalition and Labor are arguably starker than they have been since the 1993 election (when the Coalition proposed an even more significant reform of the economy than Hawke and Keating had been pursuing), or arguably since the 1970s (when there used to be more focus around “class warfare”).

The economic uncertainty around this election may be greater than usual. While the focus on reducing the Budget deficit is still there, it has softened, with each side now offering very different visions for the size of government:

Perceptions that a more Left-leaning Labor government will mean bigger government, more regulation and higher taxes, and hence be less business friendly, may contribute to more volatility in shares and the Australian dollar around the election. This may be partly offset by a firm commitment from Labor to bring the deficit under control – although both sides of politics have been saying that for years.

In short, the widening Left-Right divide in Australian politics suggests greater uncertainty going into this election, potentially affecting all Australian asset classes, including residential property. But the bigger concern is the apparent dwindling prospects for productivity-enhancing economic reform, which could be an ongoing dampener on growth in living standards.

Shane Oliver is Head of Investment Strategy and Chief Economist at AMP.

This article appeared in the June 2016 ASX Investor Update email newsletter. To subscribe to this newsletter please register with the MyASX section or visit the About MyASX page for past editions and more details.

This article appeared in the June 2016 ASX Investor Update email newsletter. To subscribe to this newsletter please register with MyASX.