How Australians can gain exposure to global tech sector via Exchange Traded Funds.

The bull run in the US and Chinese tech sectors has been the talk of the town for the past five years and it’s easy to see why.

The world’s biggest tech companies are now bigger than Europe, as the graphic below from Goldman Sachs shows. Microsoft’s market capitalisation is bigger than Switzerland’s GDP, Intel is bigger than Portugal, and China’s Baidu, Alibaba and Tencent are bigger than Spain. 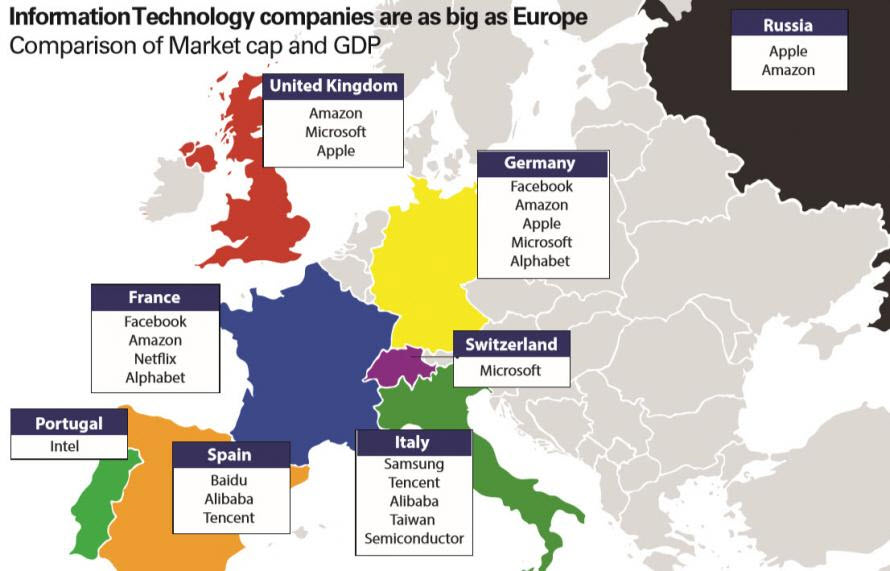 The performance figures speak for themselves. In the past five years, United States tech has delivered a staggering return of 20.5 per cent a year, while the S&P 500 has an annualised return of 13.7 per cent. The five-year total return of the ASX 200, by contrast, has been around 9.5 per cent.

The outperformance of tech is more alarming still when viewed from the top. The American FAAMG and the Asian STTAB have thoroughly destroyed, and in STTAB’s case carried, their regional index benchmarks.

(Editor's note: Do not read the following ideas as ETF recommendations. Do further research of your own or talk to a licensed financial adviser before acting on themes in this article. Tech ETF may or may not suit your investment needs and risk profile.)

Australian investors have watched these rocketing returns with pie-eyes. Australia has only a modest tech sector that takes only 1.4 per cent of the weighting of the ASX 200.

To get a slice of the tech cake, Australians have used listed funds, and ETFs in particular, as tools of choice.

This shows up clearly on ASX. Four years ago, there were no technology-focused funds on ASX. Today there are seven: four ETFs and three listed investment companies (LICs), collectively holding more than $1.2 billion of assets. (Editor’s note: other tech ETFs have recently been quoted on ASX).

There is every reason to think this flight to tech will continue. Why? We all know that technology has changed the world, continuing to drive up productivity and output. But technology has also changed investing and revolutionised wealth creation.

Every era has a defining economic sector. In the late 19th century, the "age of capital", it was the railways, which glued continents and countries together. During the two world wars, with the destruction and reconstruction that ensued, it was energy and materials. Today it is technology. 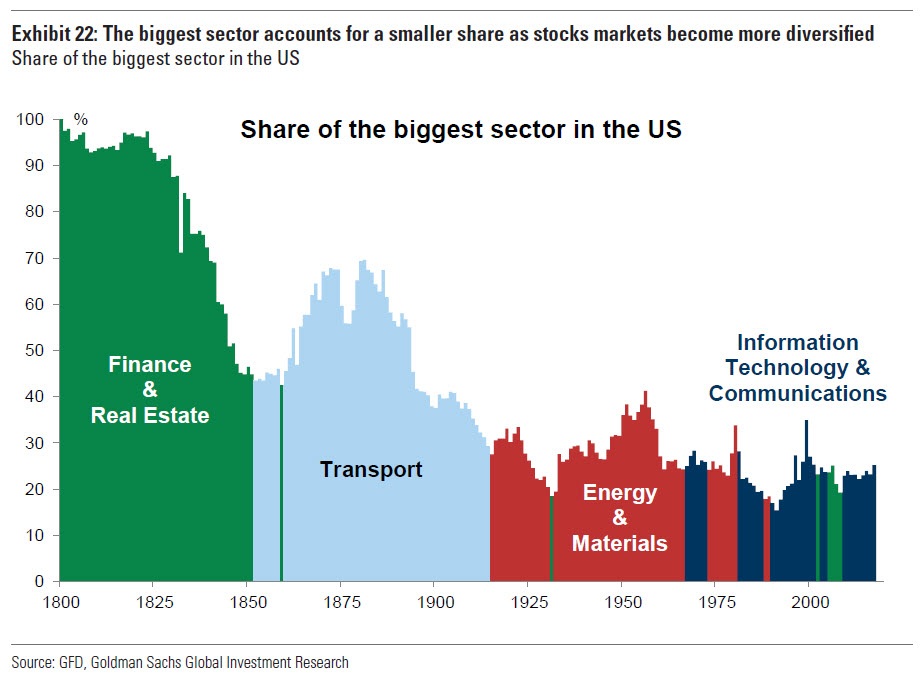 We see this clearly in the S&P 500, where at the time of writing the top four spots are taken by Apple, Facebook, Microsoft and Amazon.

This may sound unsurprising, but what is revolutionary is the speed at which these high-performing technology companies – FANGs (Facebook, Amazon, Netflix and Google) – have become so large and the speed with which they have delivered these returns for investors. 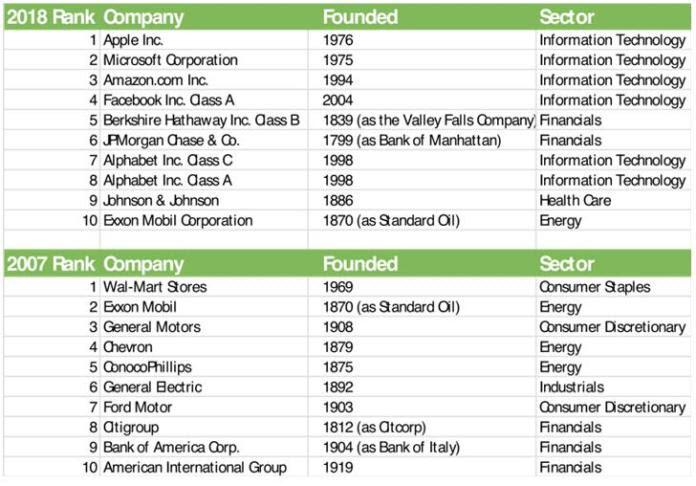 Facebook is only 14 years old, Google 19 and Amazon 22. The non-tech companies in the top 10 – ExxonMobil, JP Morgan, Johnson and Johnson, Berkshire Hathaway – are all over 100 years old (although Berkshire Hathaway has only been with Warren Buffett for 50 of them).

They got so big so quickly largely because of their super-normal profitability, which is made possible by de facto monopoly, as Financial Times chief economist Martin Wolf observed. Google, Facebook, Netflix and Microsoft have become household names with no clear competitors in sight. In the absence of serious competition, monopoly profits shoot the lights out, as ExxonMobil learnt in its Standard Oil days.

Is there a tech bubble?

Even so, the rapid rise of these companies has made some people think tech’s inflows are a function of the sector’s strong showing in recent years and ultimately just a trend.

Others take this a step further and argue that tech is in a bubble. After all, how can Microsoft be worth more than Switzerland? Isn’t Amazon’s trailing price-earnings (PE) ratio of 150 a bit extreme? And how long can growth really continue to beat value?

Yet there are good reasons to think tech companies’ high valuations are here to stay. And good reasons to believe that in coming years, Australian interest in tech funds will only grow. Here’s why, in ETF Securities’ opinion. 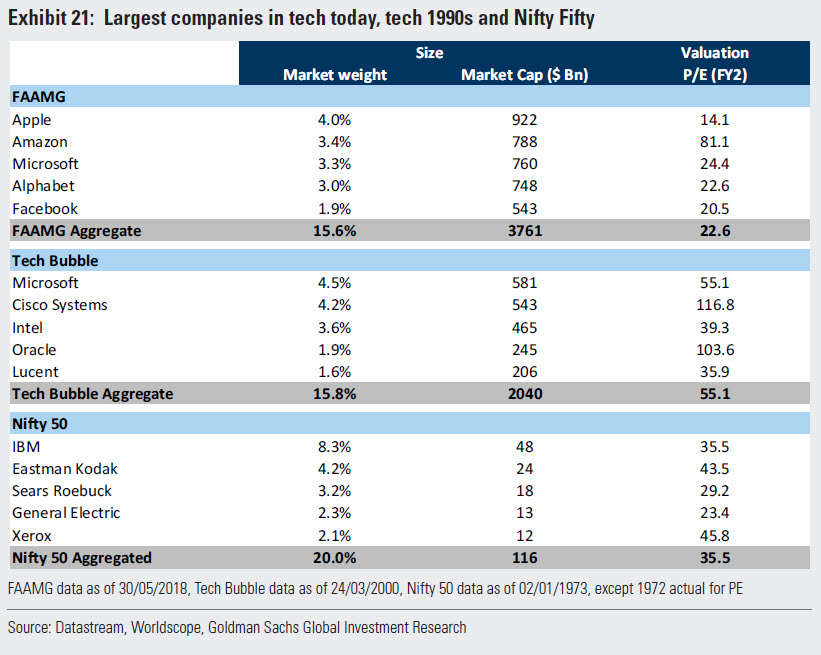 In the dot-com bubble, the tech sector took one-third of the market capitalisation of the S&P 500 index in the US while only providing one-sixth of its earnings. Today, market cap and earnings are moving neck-and-neck. 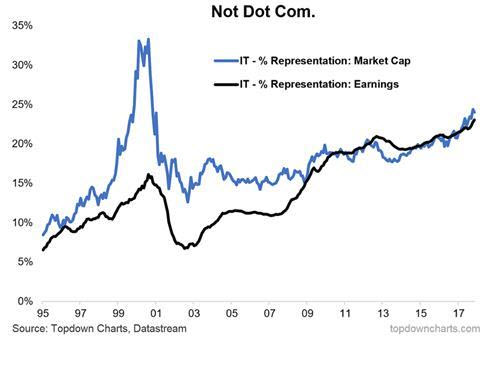 Nor have company valuations soared in the past five years in the way they did during the dot-com boom.

Certainly, tech stocks are highly valued in today’s market. But there is a vast difference between being highly valued and hugely overvalued, in our opinion.

How to invest in tech

How can Australian investors get involved in tech? One popular way is to use ETFs. They trade on the exchange, allowing investors to buy and sell whenever they want. They are also transparent and cheap; you can buy in for as little as $50 and they charge as little as 0.35 per cent a year.

One of the most popular tech ETFs on ASX is the ETFS Morningstar Global Technology ETF (ASX: TECH). And it’s also the cheapest.

TECH tracks an index managed by the research house Morningstar, whose team of experts closely examine global tech companies to determine which have the strongest competitive advantages and most durable profits.

Furthermore, it is the only pure global technology play available. The Nasdaq is available also but this is only 60 per cent technology and mainly US-based companies.

For those envisaging a robot takeover, there is the ETFS Robo Global Robotics and Automation ETF (ASX: ROBO). This ETF tracks robotics and automation companies and targets the root-and-stem of the automation revolution (from self-checkouts to self-driving cars to healthcare robots).

Whatever investors decide, technology is a place to be, and thanks to financial technology such as ETFs, it is easier and cheaper for investors than ever before.

If you have ignored ETFs because you do not understand them, or because they did not offer you the exposure you were looking for at the time, now might be a good time to review the ASX online course on ETFs.

This article appeared in the October 2018 ASX Investor Update email newsletter. To subscribe to this newsletter please register with the MyASX section or visit the About MyASX page for past editions and more details.

This article appeared in the October 2018 ASX Investor Update email newsletter. To subscribe to this newsletter please register with MyASX.