What the charts say about global and Australian sharemarkets

After a relatively calm 2017, global equity markets look set to end 2018 differently: volatility is back. After taking a tumble in February, sharemarkets across the globe did the same during the months of September and October.

I use technical analysis every day to assist with entry and exit points. When markets take a turn for the worse, the ordinary investor starts to take more interest in technical analysis (charting). They want to know whether markets are close to support, if there is more downside and whether I have seen enough evidence to swoop in and start buying.

Here I will give my opinion on what the major market indices have done until now. I will also give my thoughts on what we have in store for 2019, along with some general advice on what to look for. 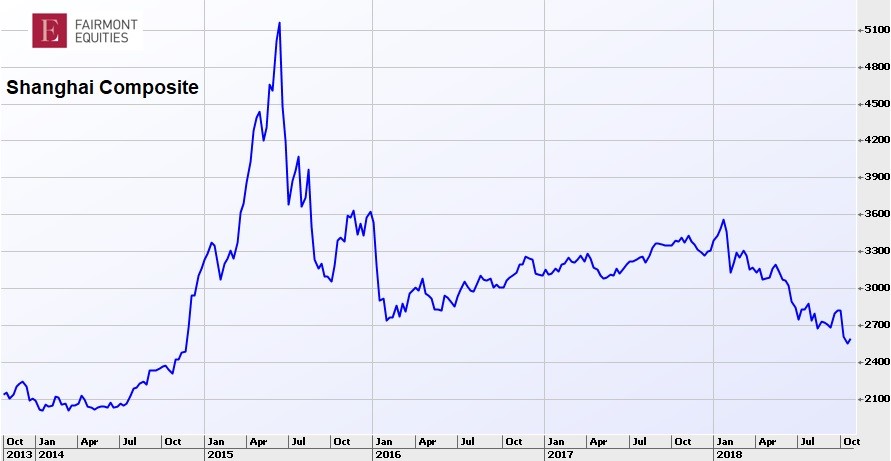 The Shanghai Composite contains all the A and B shares traded on the Shanghai Stock Exchange. The Chinese market is still fairly new compared to other major stock markets.

Unlike other markets, most traders are individuals instead of institutions, which is one of the reasons the index is so volatile. The past five years has seen the index rise from nearly 2000 points to over 5000, then back towards 2500, not for the faint-hearted. This year alone the index has shed more than 20 per cent.

Despite this, I can see signs of support on the chart. This 2500 zone appears to offer support and for the moment we seem to be getting it. I believe that 2019 could be a good year for Chinese equities as the Shanghai Composite seeks a recovery. 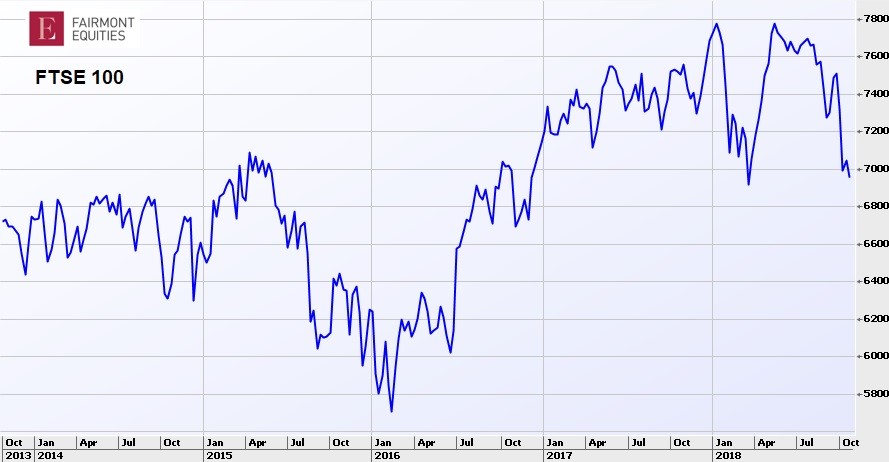 The FTSE 100 is the index of the top 100 companies on the London Stock Exchange by market capitalisation. Looking at the past five years we can see there was a decent decline over 2015, then a sharp rally in mid-2016 because of the Brexit vote.

What I find interesting is the price action during 2018. It started with a sharp sell-off from about 7800 to 6900, then managed to recover quite quickly, surpassing the peak at the start of the year.

Although it was nice to see the market recover, it did so too quickly. As soon as it got to the old high around 7800, selling kicked in. This tells us that the FTSE 100 clearly has no place being anywhere near 7800 yet. At some point it will, but it will take time.

Many market tops have come in on the back of a similar formation and the FSTE 100 this year has been a textbook example of a market top.

At the current rate of selling I can imagine the FTSE 100 falling under the 2018 low, possibly towards support near 6600. From there it will be in a better place to recommence a move higher. 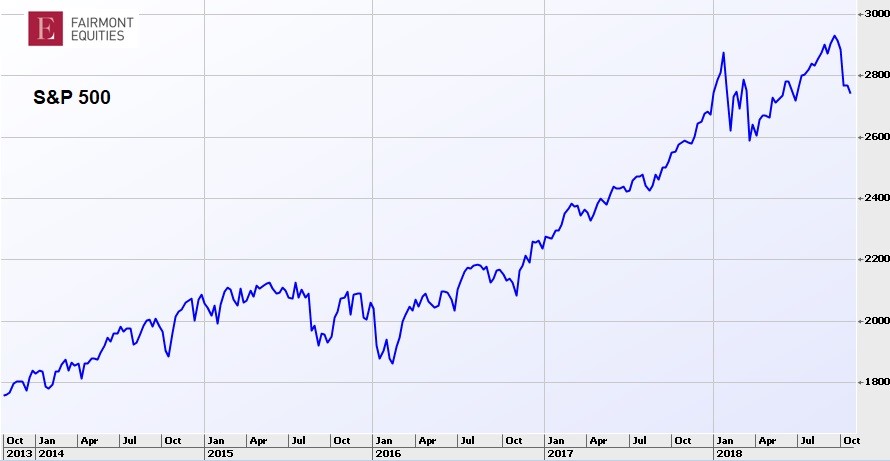 The S&P 500 contains the largest 500 companies by market capitalisation on the New York Stock Exchange and NASDAQ. The Dow Jones Industrial Average only contains 30 companies and is weighted by price, making it a little less useful.

Nonetheless, the charts for both indices look very similar. Both have performed amazingly well since the lows in 2009. The trend has been very strong and when I trade US stocks for some of my clients, it can sometimes feel like shooting fish in a barrel.

However, we cannot become complacent. The record run of low volatility that was seen during 2017 has come to an end and we are getting a bit of movement back in the S&P 500. Market tops come in on euphoria, not pessimism, and there is plenty to be pessimistic about now.

Looking at the chart though, the recent dips appear healthy and the rallies appear sustainable. Some analysts talk about the index looking “overbought” and momentum indicators showing “divergence”. Remember, though, that this is common in strong trends.

The S&P 500 has been overbought and showing divergence for several years, and that has not stopped it doubling in value. It does look as though the S&P 500 could do with a breather and we may see it go lower and retest the 2600 level some stage soon.

Once that happens, we should see it resume the uptrend and make new highs in 2019. There are no major warning signs to indicate otherwise. 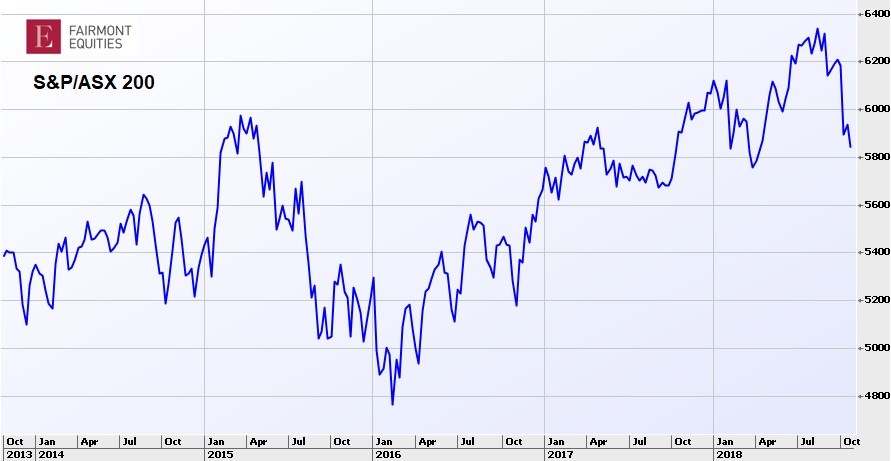 The S&P/ASX 200 has been steadily rising for the past few years, although its progress has not been as great as the US market. Remember, though, that the Australian market does not have the great tech stocks (the FAANGs) that the US has.

Also, more than half the S&P/ASX 200 is dominated by only 20 stocks, concentrated in banking and resources. In September and October, we have seen the S&P/ASX 200 pull back from its highs, erasing a year’s worth of gains.

When I step back and look at a longer-term chart, I still see one that is trending higher. As we get towards the pre-GFC high near 6800, our market will see some volatility. It is normal to see a bit of movement near an old high as investors debate whether we can break through it or not.

For our market, there are no major warning signs yet. Although I can’t predict where we will end 2018, over the course of 2019, based on the current trend, I can be confident that the S&P/ASX 200 will see higher levels.

What this all means

Apart from the FTSE 100, which looks somewhat vulnerable, other markets appear well placed to head higher. Despite 2018 not looking a great one for sharemarkets in general, it appears 2019 will be better.

Having said that, we are towards the end, not the beginning, of the bull market. The index may go up, but not necessarily all stocks.

In Australia the banks, with their current headwinds, are a case in point. I would be advising investors to look past the index and drill down to individual companies. Look at the charts for each individual stock. When you combine that with good fundamental analysis, it means your share portfolio has the best chance to grow.

Michael Gable is managing director of Fairmont Equities. He helps investors improve their returns by combining both fundamental and technical analysis. He is also a commentator in the finance media. Visit Fairmont Equities for a free weekly newsletter containing his stock tips, videos and education articles.

The ASX Charting Library provides a wealth of free material for beginners through to advanced chartists.

This article appeared in the November 2018 ASX Investor Update email newsletter. To subscribe to this newsletter please register with the MyASX section or visit the About MyASX page for past editions and more details.

This article appeared in the November 2018 ASX Investor Update email newsletter. To subscribe to this newsletter please register with MyASX.